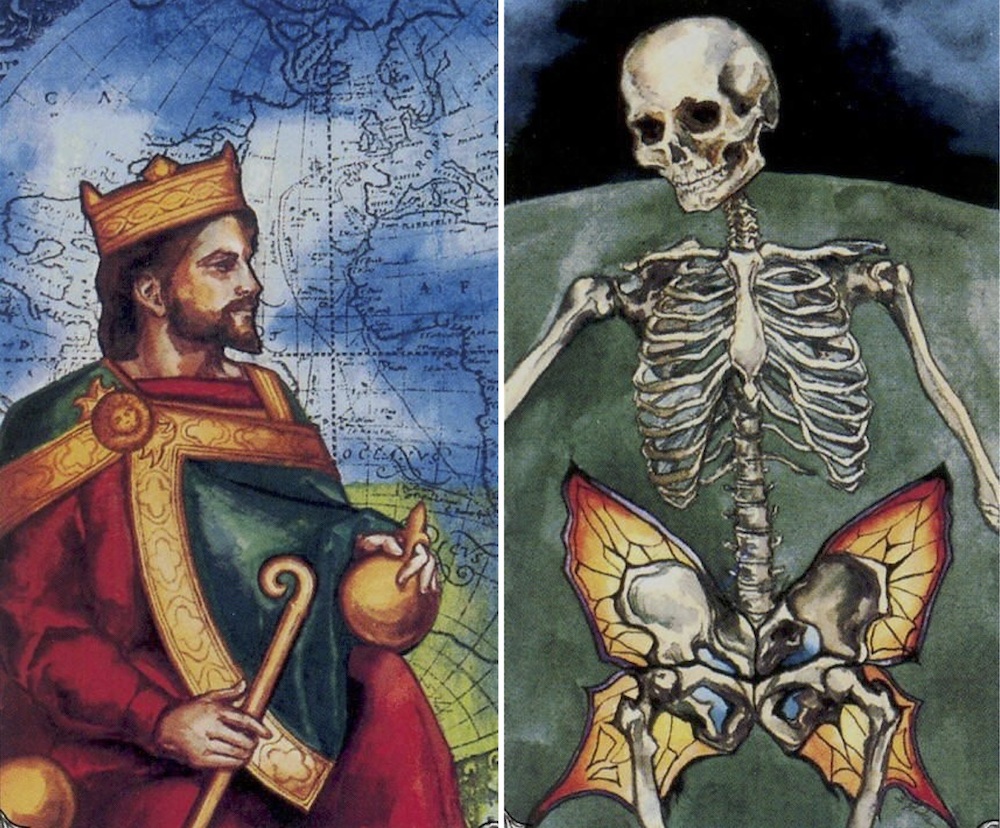 How is MARS IN SCORPIO interpreted by Tarot cards and archetypes? What readings will help you make the most of this transit? Mars in Scorpio transit is from October 31, 2021 to December 15, 2021 , most all of the second half of Autumn, a time of final reaping and to face what needs fierce change and metamorphosis.

In Tarot Mars = Emperor. Scorpio = Death, cards from the Hudes Tarot.  The Emperor Mars will be transformed and go through some metamorphosis during his stay in Death / Endings sign of Scorpio. How will you experience your aggressive, assertive, pointed and even violent energies by the end of this period? You have the opportunity to dig deep into these parts of yourself, make them conscious and heal them.

This Emperor/Mars energy can be a brute force that wants to hold onto power over others no matter what. But this Emperor can also be activating and encouraging. Mars/Emperor is what gets you out the door to pursue goals and do what needs to be done. Think of it as testosterone.

Mars in the sign of  Scorpio is driven to dive deep and understand motivations, to heal whatever gets in the way of fully living and to take the time to analyze and deeply feel this vital and dangerous energy within – this could be the drive to succeed, to fight, to kill, to conquer, to lead, to inspire. Scorpio is represented by the Death card which means all that is not vital and meaningful must be relinquished so that the new vision and path will take root. There’s no room for the trivial or superficial when dealing with Scorpio / Death.

When the Emperor enters the realm of the Death card and lingers for almost 2  months there must be a significant change in how he rules, mobilizes others, and pursues ambitions. One thing’s for sure – the Mars energy has to change and grow up. Emperor Mars could shape shift into a frightening dictator. But hopefully and more likely, the raw testosteronesque energy can become that of an achiever, wise leader, can-do person and encouraging coach.

The Emperor archetype within is already very focused and determined but will become even more so and be dead serious about setting goals and doing everything it takes to achieve them. How can you best use this potency?  What do you most want to achieve? Step One: Get to know the deepest motivations underlying your goals and intentions. As you look at this, you may want to change or modify your goals, be sure your motivations are worthy of the effort.

Examine the roots of your anger, ambition and aggression. Do you want to handle them in a different way? Imagine if you were the President, what would be the strong, wise way to handle this kind of power? Petty and vindictive? I hope not!

The house and sign of your natal Mars and the house that Scorpio rules reveal where this will be the most intense for you personally.  It’s time to say yes to approaching and exploring the volcano within, for immense gifts are there. Don’t be surprised if memories of dark and destructive feelings, arguments and harshness arise during these next 7 weeks. They’re ready to be healed and integrated in a useful way

You can explore The Emperor Under Pressure To Change in a session about how to deal with and heal aggression, anger, and violence as a victim and/or a perpetrator. How can this volcanic energy help you live a more passionate, courageous life and also be compassionate? How can you stand up against it when it is abusive?  30 minutes to one hour.

Or if you feel more like a mouse than an Emperor , there’s The Rabbit & the Bat: Facing Down A Fear That Blocks You. It’s a session that looks at naming the fear, revealing the block, and image-ing what you want to do / become when that Fear is released.  45 minutes – one hour.

A Tarot Astrology look at how this Mars in Scorpio transit affects your natal astrology by looking at the Tarot archetypes involved and the story they tell. 45 minutes – 90 minutes depending on amount of detail desired.